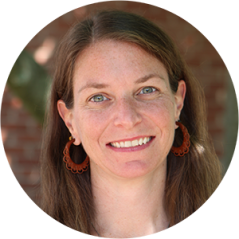 Design is everywhere. Almost all things we touch were imagined and realized through an intricate process of design. Art teachers try to instill in their students a keen understanding of these stages of development from initial idea to final form. Each project I present to my class is a unique design challenge through which I help students navigate their own creative paths.

This past semester, I was charged with teaching Foxcroft’s Introduction to Engineering class, which delivers a curriculum developed by Purdue University called Engineering Projects in Community Service (EPICS). In this design approach, an entire class has to coalesce into a team and deliver a single solution to a creative problem. Our mission was set to design and manufacture something that could add value to the community, and we focused our efforts on Foxcroft School’s very own Office of Student Life.

This EPICS team successfully established a climate of open communication and eager collaboration. The girls’ confidence grew as they initially worked independently. This allowed them to recognize their individual strengths as they worked through concept development to prototype building. Through the critique process, the girls ultimately understood their unique contributions to their team and they began to coordinate their efforts. Sophomore Eunice Y. says, “I learned that everyone’s idea can be innovative, and we only need to trust ourselves.“ Adds senior Lizzie S., “I felt really proud of how my group worked as a team. We all brought different strengths and ideas to the table. I was impressed with how well we meshed.”

The specific design challenge was to create a multipurpose pop-up shop that could be used by clubs and other organizations to spread some “Trail Magic” — surprising and thoughtful activities that might bring a little unexpected joy into our lives. Together, the girls brought to fruition a fun, transportable, and interactive station that will enliven events both on and off-campus for years to come.

The Office of Student Life worked closely with the engineering students throughout the entire design process. There were a number of community members invited to design reviews to provide valuable feedback. These students had to navigate public speaking and pitch their designs to an audience that was ready to push the functionality, feasibility, and aesthetic quality of their work. Georgia G. ’20 observes, “The critical design review was a great experience, for multiple reasons. I felt like it really involved everyone and we could explain our ideas in our own spot lights. It made us get the feel of what it’s going to be like in the real world.”

The students’ biggest hurdle was building on those conversations and reshaping their ideas into a deliverable outcome. Mimi S. ’20 writes, “One of the greatest challenges was making decisions about the different design paths that our final product could take. There were times when our prototypes were very different, and we were not sure how
to best merge them.” Many of the strongest individual ideas were carried over into the final design.

“The Shoppe” was ultimately conceived as two separate carts that could function both independently and together. The first was named “Charlie” after Charlotte Haxall Noland, who founded Foxcroft in 1914 and first backed the Fox team. The second was named “Millie” after Mildred Greble Davis, the first Hound backer. By the time the final construction phase was upon them, the girls were operating as a seamless team. Where one person left off, the next would pick right up and finish. “There was never someone not doing something. Whenever we finished our tasks we would find someone to help,” says Lauren S. ’20.

They were driven and, most importantly, proud of what they were doing. The wood used was reclaimed from the Brick House pergola and given a new life in the form of two rolling carts with chalkboard inlaid doors and pegboard shelving interiors. Laser-cut signage to feature the School and the hosting organization or individual was added. Amanda C. ’19 explains, “I really enjoyed the final construction with painting sealant, using a sander for the first time, and using the power saw. It was a very fun process and I feel much more confident.”

The entire project was an exceptionally rewarding way for girls to be creative, to respond to critique, adapt to change, work as a team, and to give a part of themselves to fill someone else’s needs other than their own.

Founded in 1914, Foxcroft School is a girls boarding and day school grades 9-12 in Middleburg, VA, near Washington, DC. View all posts by foxcroftschool